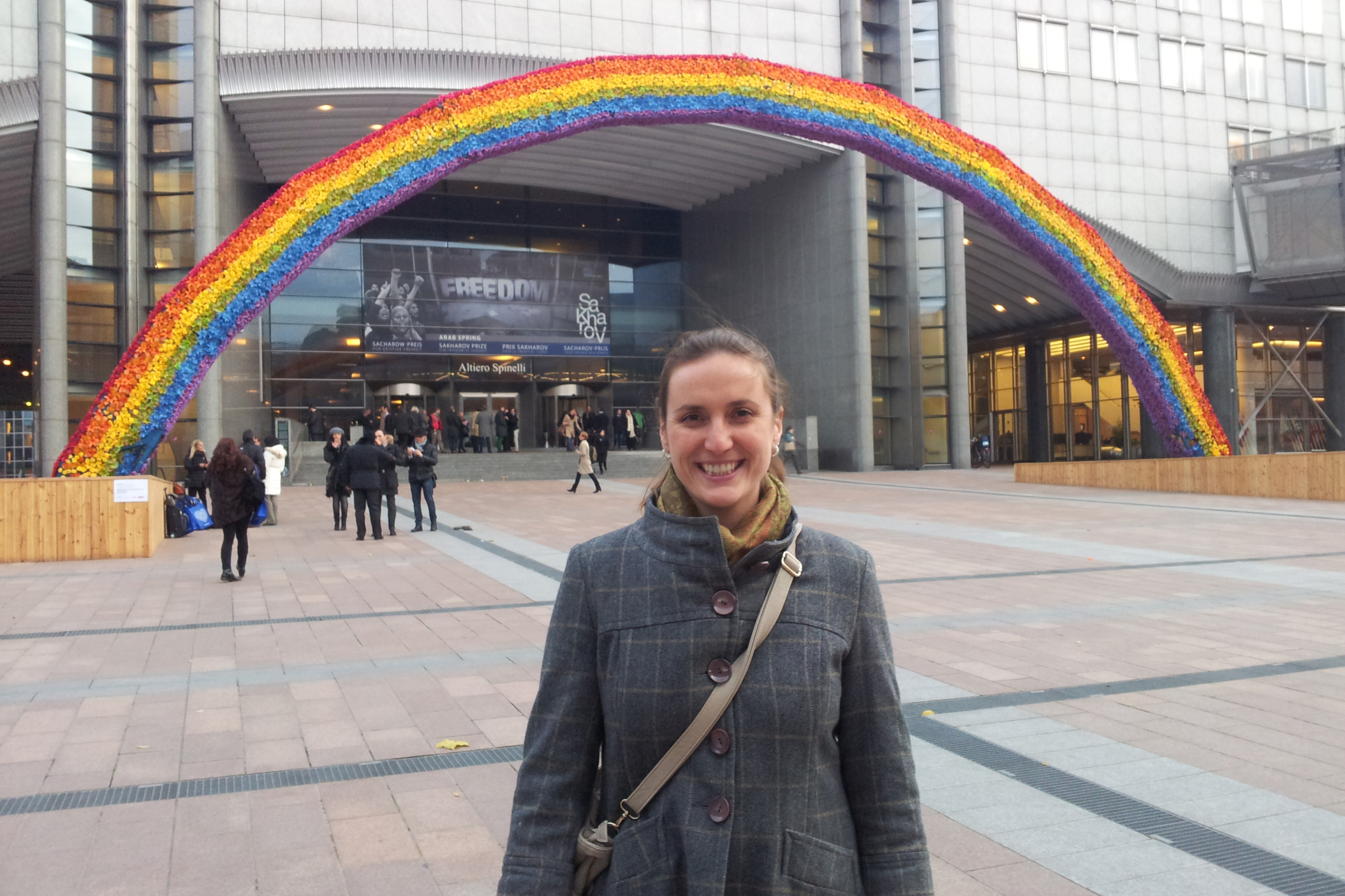 Meet the inspirational Emma Beamish, a former international cricketer turned English teacher, who has never let her epilepsy hold her back from achieving everything she wanted.

She has lived with idiopathic generalized epilepsy (IGE) since she was 14. Find out more about her career and her journey below.

When did you get into sports?

I played sports from the age of dot. My entire family is sporty: mum’s a tennis player, dad is a sailor as are my brothers. I started with hockey, then began cricket in junior school. I was really lucky that the primary school had great links with a local cricket club. We moved to the UK as a family when I was 15 and from there I played in the County Surrey setup alongside the fantastic English cricketer turned commentator Ebony Brent for many years.

I was selected for England U17 but then I was also selected for Irish U17. I went to Exeter university where there is super sport and support for athletes. I was flying back most weekends to either train or play for Ireland and went to Ireland throughout the summer. I finally got selected for the full Irish team in 2003.

Personal highlight from the cricket world?

Initially, it was being ‘Player of the Tournament’ at the Women’s U21 European Cup, but that was quickly replaced by going to the 2005 World Cup in South Africa, it was AMAZING! The best part of the experience was meeting other great and phenomenal female cricketers. We also won the European 2020 tournament in 2009. I got to travel the world doing a sport that I loved for over 10 years and I received over 22 caps for Ireland.

Did you face any issues as a cricketer with epilepsy?

Reflection is always a great teacher. At the time while I was playing cricket competitively I was really focused on training and getting selected. Luckily, I was seizure free for most of my career. Looking back now what I found most difficult were the side effects from the Epilepsy medication, this could range from anything from extreme tiredness to anxiety or mood swings. It was also harder when I was balancing a full time job, playing cricket and  managing my condition.

Despite being very open about my condition and doing a documentary for RTE called ‘This is me’, I don’t think the girls knew how to talk to me about it. I remember a coach berating me for having a slow run rate and why didn’t I show more energy at training sometimes. The reality was I physically couldn’t. He didn’t understand my condition and I was also a little wary of saying too much in case I wasn’t selected. At times it may have felt that I was struggling with more than my other teammates but it just made me work that much harder to get selected. And sometimes it just wasn’t enough. That’s life.

However, as I look around sport now, there is more openness about supporting athletes and their mental health. Sometimes just by saying "hey, do you need anything? Do you need a break?" you can have a positive impact. I don’t think this openness was there when I was in the system. But I am delighted to see the growing awareness and support structures for future cricketers with epilepsy.

My single focus and dedication with my cricket was not mirrored on the jobs front. I’ve had what many would call a portfolio career. Education has always been hugely important to me, and has influenced my career choices. I began in sports administration and event planning and then went on to spend four superb years at GlaxoSmithKline. Working for such a successful multinational has very similar traits, behaviours and cultures to successful sports teams. I learnt so much during my time there.

While I was there I kept studying and did a diploma in Journalism and Media studies and continued to get my coaching badges in cricket and hockey. I wrote sporadically for different papers and gave talks on Epilepsy. This ultimately saw me giving a talk at the European Parliament advocating for openness in Epilepsy in 2011, something which I am very proud of.

I then sought a career in teaching. I have been teaching and coaching in the UK and Ireland for the last 8 years. I’ve also facilitated Teaching and Learning groups for teachers, and was the editor of the school magazine. Teaching has taught me a lot and I love it. But the most amazing thing it has taught me is how to motivate so many different types of personalities! To look deeper into professional development and management I completed a Masters in Human Resource Management in 2019.

Can you tell us your epilepsy story?

It began when I was 14 years-old in a boarding school in Dublin. I was in my state exam year and at the start of the year my parents had told me I was moving to the UK. I was really stressed from exams and hadn’t been sleeping well. I had a seizure in school and was then put on a high dose of Epilim in 1997.

What has been a constant throughout my life is that all the medical tests whether they were MRI’s or EEG’s always came back as ‘normal’ but I still have no answers. Whilst at times I make peace with it, there are always still those occasions that bubble up and I’m not ok.

My seizures have always been tonic-clonic or grand-mals. I’ve had about 11 seizures throughout my life and whilst that doesn’t sound like a lot, the impact they had was. I had them sporadically throughout my teen years, but they mentally didn’t affect me as much as they have in later years. My parents obviously found it incredibly tough but I’m lucky that they didn’t mollycoddle me, they were worried and did research, but they never put the stress or worry on me and I’m so grateful for that. They let me work out my life and my feelings for myself.

One of my most interesting seizures was in my 20's, I lost my front tooth and rocked it well! Being seizure-free, doesn’t mean I don’t think about it most days. I do my best to look after myself and live my best life. That means surrounding myself with good people, eating well, exercising well and looking after my mental health. There is only so much I can do and most importantly learning to give myself a break when I need to.

Can you tell us about your last breakthrough seizure?

After living seizure free for 10 years I had a breakthrough seizure a year and a half ago, whilst teaching a class of 16-year-olds! We were doing a Halloween activity and I said I was hot and then I let out a banshee scream. The kids thought I was acting due to the Halloween theme but one of the girls in the class has a sister who has tonic-clonic seizures, so she recognized this as a seizure. The students were amazing and sprang into action. One of the students had just done a first aid course and put me in the recovery position and the other girl knew to put something comfortable under my head. Within minutes the school nurse was there.

It’s interesting how your instincts kick in. As I came round my first question was ‘Are the kids ok?’ I knew I was fine as soon as I came too, but for them it must have been scary. But we were very lucky in my school as there were superb councilors on hand to talk to kids.

I went straight to hospital and had a CT scan. When that came through as ‘clear’ there was an overwhelming sense of relief. It was just a seizure. I’ll take that over something more sinister. I had been worried and scared about having another seizure. And suddenly here I was, with the thing I feared most...and I was ok. It brought the strangest sense of relief and calm.

Is there still a stigma associated with epilepsy?

I suppose it depends on who you talk to. If you talk to my husband, family, friends and the people I surround myself with the answer is ‘No’. But there will always be those who don’t know enough about the condition. It is also difficult because the condition presents itself so differently in each individual person; so what is true for one person, may not be true for the next.

Yes, I have dealt with discrimination in the workplace. Did I like it? No. Could I change it? No. But I also feel that if anyone does treat me badly, then I will not work for that person. But that would be true whether I had epilepsy or not. The reality is nothing will change dramatically overnight, but little by little, the more education and information you can pass on about epilepsy, the more people will come to understand it. And soon, rather than decisions being made about you, they will be made with you.

What is your message to other people living with epilepsy?

Epilepsy is coming along for the ride with you whether you like it or not. It will be like any relationship; you’ll have good days and bad days, but you have to look after it and yourself. You are the only person who is going to live your life, yes you might have to adapt a few things here and there, but ultimately you may just find that it pushes you to achieve more and be a better version of yourself. Epilepsy will be only one chapter of your life and you have a whole book to fill. Remember, you’ve got this.

Rebekah Kaska: The life of an epilepsy nurse